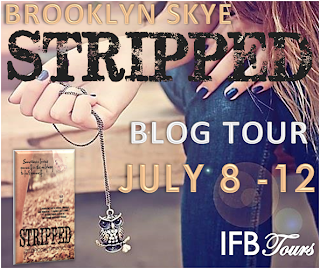 When I heard about Brooklyn Skye's blog tour, I jumped at the chance to participate. As a YA reader and writer, I was curious about New Adult, an emerging genre the covers the college years and young professional years, the gap between YA and Adult literature. I've read a few NA titles so far, and STRIPPED is my favorite, hands down. For those who have followed the book reviews on my blog in the past, you know I use belts instead of stars. (Black belt = 5 stars, Brown belt 4-4.5 stars etc.) So where does STRIPPED rank? Brown belt. And for those interested in the NA or looking for a well-written romance, I'd definitely recommend it. Below you'll find my review, my interview with Brooklyn Skye, and a chance to enter the STRIPPED Blog Tour Giveaway. Also, please feel free to check out the other stops of the tour! 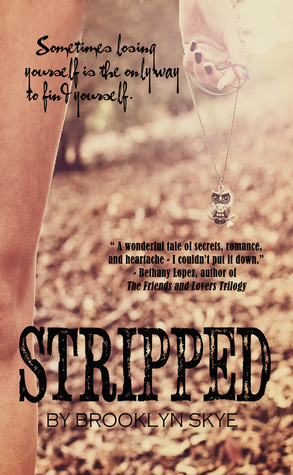 “I like you.” His voice is low and soft, which I don’t deserve. I look away, down the rutted parking lot.
“Don’t... waste those words on me.”
He touches my cheek. “You just need someone to show you.”
“No.” I ease back again. “I don’t. So please, Torrin, stop trying to swoop in and save me. I don’t need saving.”

College freshman Quinn Montgomery will do anything to avoid the mistake her sister made—killing herself over a boy. But when she is forced into nude modeling at a local college to support her family after a bankruptcy, she begins to crack, just enough to let Torrin, the university’s top varsity oarsman, see that the real Quinn is not as feisty and unapproachable as she wants everyone to think. But letting someone in comes at a steep cost and, it turns out, Torrin is connected to Quinn’s family in more ways than she could ever imagine.

College freshman, Quinn Montgomery, has a lot on her plate. Her sister recently committed suicide and her father lost his job as the result of a rather public scandal. When Quinn's parents tell her they can't help cover all of her tuition, Quinn gets a job as a nude model at another local college, the one her fired used to work at no less.

Quinn walks out of her first session. Something about that made her real to me. She's a strong girl, but conflicted. At this point, I was in. I wanted to read more. Enter Torrin, the swoon-worthy oarsmen Quinn meets while waiting for the bus.

I enjoyed the connection between Quinn and Torrin. It wasn't insta-love. In fact, Quinn is a wonderful mixture of snarky, witty, stubborn, and vulnerable, a very interesting narrator, and Torrin likes her for it. There were many moments when their relationship reminded me of the saying, "Love isn't about being perfect. It's about being perfect for each other." Quinn isn't perfect. She's complicated, mature and naive at the same time, and as a reader, I found my self oscillating between rooting for her and shaking my head, thinking "You did not just say that." Personally, I enjoyed the complexity and found Quinn's inner dialogue entertaining, but I could also see how some readers might get frustrated with her.

As for Torrin, well he's basically the stereotypical dream guy: hot, athletic, understanding, kind, but he has a secret too. I won't give the twist away, but I will say I enjoyed it and hope to read more about Quinn and Torrin in the future.

Lastly, a note about the writing. I loved how the author captured Quinn's attitude. The description was well-done and the scenes were well-paced. Some of the romantic scenes were a bit trite, but not enough to be too off-putting.

And Without Further Ado...The Interview!

I love that Quinn is both stubborn and guarded because of her life’s circumstances, yet like most college students, especially freshmen, she is trying to figure out who she is. What do you hope readers will take away from Quinn as a narrator?

Some of my beta readers left comments like ‘Quinn is not right in the head,’ which is exactly what I was going for. The girl has been through a lot and the culmination of these events has significantly skewed her thoughts. On the flipside, Quinn is still just a girl trying to figure things out and I hope readers will be able to connect with that side of her too.

New Adult is an emerging category that bridges the gap between young adult and adult literature. What drew you to making Quinn a college student rather than say a high school senior?

When I wrote STRIPPED three years ago, I had the idea of a college girl doing something extreme to pay for her education. About halfway through the draft—after a bit of market research—I discovered college-aged protagonists were sort of a no-no in the industry. Against my gut feelings of THIS IS NOT GOING TO WORK, I changed Quinn to a high school senior. Once the draft was done, I hated it. Quinn was not supposed to be in high school and the YA voice just wasn’t working for me in this story. So I set it aside for two years and worked on a few other projects. About six months ago, I decided to pick the draft back up and rewrite it the way I had intended. About that same time, the New Adult category was starting to emerge and several books were popping up on the Best-Selling lists which gave me a little more encouragement to go with my gut.

What would you say was your biggest challenge while writing Stripped?

At first it was the category issue, but once I decided to write it as New Adult the biggest challenge then was to make Quinn relatable. She’s not very nice—especially to Torrin—which makes her pretty unlikeable. I didn’t want to soften her in that sense, so I had to make sure readers could connect with Quinn and at the very least understand why she was that way. I’ve had an amazing reaction from readers thus far with comments like:
“Quinn's sassy, stand-offish approach is hilarious.”
“I really found myself lost in Quinn's story, and also saw a little bit of myself in her when I was that age.”
“I loved Quinn. Her fear and devastation due to different types of loss are genuine.”
“I laughed and cried with Quinn on her journey through a very heart wrenching time in her life.”
“Quinn is a real, down to earth character, that is not afraid to speak her mind, and that's what I love about her.”

Of course there were others who didn’t connect with Quinn…which is fine too. Can’t please everyone ;)

What are you writing now? Will we be seeing any more of Quinn and Torrin soon?

Currently, I’m working on a novella that continues Quinn and Torrin’s story. When STRIPPED debuted, I received an overwhelming surge of people wanting more, requesting an epilogue and asking if I was writing a sequel. While I had originally planned for STRIPPED to be single-title, I decided to go ahead and write a novella that continues in Torrin’s point of view. WITHOUT YOU will release October 8th.
I’m also planning a companion novel to give Nikki her own story to be released Spring 2014.

Please talk a little bit about your journey to publication. What was the biggest lesson you learned? Do you have any tips for your fellow writers? Anything you wish you’d done differently?

My journey isn’t very conventional, but then again are any of ours? The story of how I got my agent can be found in my interview with Writer’s Digest (http://www.writersdigest.com/editor-blogs/guide-to-literary-agents/how-i-got-my-agent-nicole-steinhaus). The biggest question I get is why did I release STRIPPED myself when I work for a publisher and have an agent? Truth is, it was just a gut feeling I had. Being tied to the publishing industry, I knew New Adult books getting contracts were few and far between. I also knew several self-published authors were doing just fine without them. Would I change anything? To be honest, I don’t think I would. I’m very pleased with how well STRIPPED was received and the support I’ve been blessed with amongst the writing community. My biggest tip for authors is do what feels right for you, and don’t judge others if their decisions vary from yours. I’ve witnessed—and been the topic of—some very heated discussions revolving choices in publishing, and I think people need to focus more on themselves and their craft and not worry so much about what others choose to do.

Thank you for having me!

Brooklyn Skye grew up in a small town where she quickly realized writing was an escape from small town life. Really, she’s just your average awkward girl who’s obsessed with words. Her Best Selling New Adult debut, STRIPPED, is out NOW! Represented by Bree Ogden of D4EO Literary Agency.

You can find STRIPPED on Amazon and Barnes & Noble. You can also follow Brooklyn on Twitter or visit her web site  for updates, teasers, and more.

a Rafflecopter giveaway
Posted by Unknown at 6:49 pm