So it's about to be winter here in South Africa, but it's summer in the US. I'm halfway done with my Fulbright grant! I've had lots of time for reading and writing lately. Stay tuned for a writing update post, but for now, here are some books I've read and enjoyed.

In a previous post I ranked the books I liked using the martial art belt system. My version of stars or a two thumbs up. Black belt is 5 stars. Brown belt is 4 stars. Red belt is 3.5 stars. 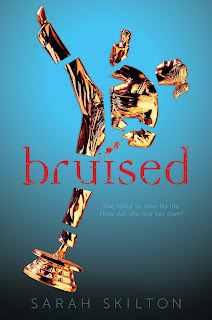 I love sports-themed YA and as a black belt myself, I wanted to read this book as soon as I first saw it on goodreads. I'd probably give this book a 4 star rating. It's not quite a black belt based on my ranking scale, but definitely a brown belt. I loved the complexity of the main character, Imogen, and while I don't think I would have reacted the same way she does--she gives up martial arts completely and begins teaching self-defense and falls for the guy in the process--I found her character consistent and believable. Imogen witnessed a crime and when she arguably needed her martial arts skills the most, she froze. Her training failed her or maybe she failed it. Imogen begins to question her training and wants to prove that she can defend herself. This includes demanding her new training partner punch her. Imogen still upholds some of the training principles she learned over the years, as martial arts isn't just about kicking and punching. It is also about respect, self-control, and discipline. The other characters, Imogen's friends and family were so well-rounded and complex, which definitely added to the story. Overall, the writing style was very good, and I don't think you need to have a background in sports or martial arts to appreciate the book, though as an athlete, I found I enjoyed the book more. Plus the cover is pretty cool. It took me a second to realize it was a broken trophy, but I love it. It fits the book well.

If Bruised is a 4 star or brown belt ranking, I'd say Boost is equally as good, but for a slightly younger audience. The main character Savvy Christopher is 6 feet tall and a basketball star. She's new in town and is confident enough to ditch the tryouts for her age bracket to try out for the next group up. Savvy makes the team and even catches the eye of other coaches. Savvy's sister is her opposite. Savvy's very tall for her age and is slim. Her sister is petite and needs to watch her weight to fit in with her fellow cheerleaders. The book deals with the possibility of substance abuse. Savvy is accused of taking performance enhancing drugs. Overall, I liked Savvy as a narrator. She is confident (which is important. It was refreshing to have such a self-confident narrator) and funny at times. The author does a good job of showing the basketball team's dynamic as well. I was a little disappointed in the ending, but I think the lower age bracket of YA 13-15-year-olds, especially 13-15-year-olds who play basketball will enjoy Savvy.

I loved the way this book started, but then it dragged on. I finished it, but it was a bit of a disappointment. The book spans almost two years of high school and though it is well-paced, the novel would have greatly benefited from a narrower scope.

Truth or Dare by Jacqueline Green

I hate to say it, but this book is not worth it. I'd say two stars, which in keeping with the martial arts theme would make it a yellow belt. I read the sample on my kindle and was interested in the premise and the characters. It seemed similar to Pretty Little Liars, which I loved when those books first came out. This book drags on. It is far too long and too slowly paced that I stopped caring about the characters and had to resist the urge to skip ahead or stop reading altogether. The ending was completely predictable and cliche and thus, very unfulfilling.

The Book of Broken Hearts by Sarah Ockler

Some aspects of this book are predictable. Two of Jude's three older sisters have their hearts broken by the Vargas boys, so they make then 12-year-old Jude swear to never be involved with a Vargas. Five years later, Jude and her father need a mechanic to help fix his motorcycle and guess who they end up hiring? Emilio Vargas. Yeah, bet you didn't see that coming. Okay, so it's predictable, but Emilio and Jude don't fall for each other right away. Their banter is really cute. I love how Ockler handles the dialogue. Also Jude's inner monologues are also pretty funny. Her narration makes me pardon the predictability. The other aspect of the novel I enjoy is that there is some depth to the story when we learn Jude's father has early onset Alzheimer's disease. His memory is slowly slipping, but Jude gets to see a side of her father she didn't know about when he talks about riding through Argentina on his motorcycle. Jude chooses to spend time with her father, arguably because she doesn't know how long it will be before he forgets who she is completely and even though she has sisters, her older sisters have moved away, so much of the responsibility of caring for and protecting her father falls on Jude. (One of the sisters does visit though.) Consequently, Jude does not get to spend much time with her friends. I like the relationship between Jude and Emilio. I also like that Jude is a sassy narrator who chooses to put family above all else.

Being Henry David by Cal Armistead

Great male narrator and an interesting plot. Not predictable. Strong description from the very beginning. It's definitely worth a read.

I loved the prose in this book. The writing was beautiful and while the book deals with teen pregnancy, I thought it was a refreshing take on the issue.

-Beth
Posted by Unknown at 6:52 am No comments:

Below are my query and 250 words for The Writer's Voice contest. Doing my best to make the font easier to read, but blogger has been giving me problems. I'm still not sure why some it is showing up in black and some of it is white. Sorry guys! I added a background color. Hope that helps.

Told in alternating first person narratives, Podium Finish, a YA novel of 76,000 words, is the story of 17-year-old Olympic hopefuls and best friends Alex Abrams and Harper Kavanaugh.

Alex Abrams comes from a family where being anything less than the best is unacceptable. Alex used to be the best. She was a two-time Junior National figure skating champion. Then she moved up to the senior level and finished 12th at Nationals. With two years until the Olympics, Alex's Dad pressured her to switch disciplines in order to keep her Olympic dreams alive. Now six months before the Olympics and partnered with former World Championship bronze medalist Ace St. Pierre, Alex's father is micromanaging her career, something Ace can't stand, and worse still, Ace is keeping secrets from her. When these secrets come to light, Alex must make a choice. She must choose between her father and Ace. She chooses Ace. More importantly, she chooses to make the Olympic team her own way.

With six months until the Olympic Games, Harper is living the life she's always dreamed of. She's fighting for the starting spot on Team USA Women's Hockey, and for the first time ever, she has a crush on a guy who likes her back. Things couldn't be any better, but they can, and do, get worse. In an effort to seal up the starting spot for good, Harper runs a risky play at practice and breaks her knee. After six weeks in a cast, she learns that Coach Graham is picking the Olympic team earlier than originally planned, and two girls won't make the cut. Harper pushes herself harder than ever, but will it be enough?

Alex
Skype is open on my laptop with my parents huddled together so they can both fit on the screen. We do this every Saturday afternoon, a Colorado Springs Olympic Training Center to Connecticut Skype date, and they always look so stiff, like they’re doing a webcam interview for a talk show. Closed off body language. Total statues. Dad should put his arm around Mom’s shoulder. They’d look more comfortable that way, like they’re actually in love.
“Ace and I are doing our Romeo and Juliet routine on the ice for the first time this afternoon,” I say. Mom’s melon colored lips curve into a wide, tooth-bearing smile. I knew she’d like the theme. She danced for a ballet company in New York before she met my dad, which makes her the only other person in my family of five who can appreciate art for art’s sake.
“Can’t wait to see it,” she says.
I’m excited to get out of the dance studio and try the routine on the ice—it’s like a ribbon cutting ceremony, announcing the Olympic season has officially begun.—but I’m not exactly as thrilled about the Romeo and Juliet theme as I should be, as Mom is. Everybody does Romeo and Juliet. Hell, Ace did it four years ago with his former skating partner, Sophie DuBassin, which means I have big, albeit bitchy, skates to fill because Ace and Sophie were third at World Championships before they called it quits.