I decided to resurrect the blog I started while I was studying abroad in Oxford, England. Why? Because I'm abroad again, and will be for the next couple of years.

In a couple weeks, I will begin my first semester of grad school at the University of British Columbia, Vancouver. In January, I will be leave for Durban, South Africa, for a nine month Fulbright English Teaching Assistanship. I'll probably spend a couple months in the States and then will return to Vancouver in 2014 to finish my MFA.

Here's a few observations of Vancouver so far:

1. The people are incredibly friendly. In the States, we talk about Southern hospitality, but that same friendliness exists here too.

2. The labels on the food are in French and English. The French part of Canada is in the east, think the Quebec area and the parts of Canada closest to Maine, but since French is one of the official languages, it is used quite regularly. As someone who has studied French since the eighth grade but has had little time to speak it because Spanish is the popular second language in the south, I love it. I started reading some of the French labels and my brain automatically translated it. It took me a minute to realize I was reading French. Glad to know all those studies have paid off.

3. There are smart cars all around the city called Cars2Go. My landlord said that people can pay a small fee and use an app on their phone to locate the nearest car. These cars can park anywhere. It's a cool idea. I suppose the only downside is that if you park in a very public area, someone could take the car since I don't think they can be reserved, but don't quote me on that.

4. There is public transportation. More importantly, I know which buses I need to take without getting lost. Those who know me best will confirm that I have no sense of direction, so this truly is an accomplishment.

6. I have beautiful view of the mountains everywhere I go and there is a beautiful beach pretty close to my house.

7. I live in a diverse part of the city and love it. There are so many cultures present in this part of town and everyone seems to get along pretty well. Imagine that.

8. There is a channel here called CTV. It has American shows from a variety of networks, including Grey's Anatomy, Criminal Minds, Big Bang Theory (which I watched for the first time last week and loved) and the Listener, which is a pretty good Canadian show about a telepathic EMT who helps the police. CTV also had outstanding coverage of the Olympics. They showed footage of all the sports, even synchronized swimming and rythmic gymnastics, both of which were surprisingly impressive to watch. 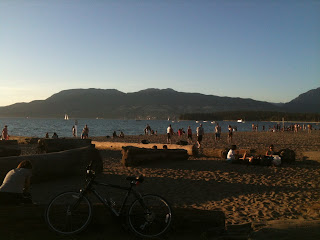 More posts to come in the next couple days, maybe even as early as tonight, so check back soon and if you haven't already, sign up to follow my blog.